A couple of years ago I had the honor of starring in and scoring a short indie film by director Mark Schimmel called ’The Musician.’ Never having done anything quite like this, I had no idea what a fun journey it would be, nor that it would be so well received on the film festival circuit. It was shot entirely on location in downtown Chicago over three days, and tells the story, without dialogue, of music’s transcendent power to bypass all superficial differences, universally uniting us in its mystery and joy.

Schimmel’s original script was called ’The Cellist’ and the lead character was to be a renowned male cellist who busked on the city streets and whose life changes when a young street kid steals his instrument. But after being introduced to my work by a mutual acquaintance, he decided to change up his original narrative to fit me.

When I asked Mark if he already had a score in mind, he said he didn’t but was open to any suggestions I might have. I already had two songs  in mind from my catalog  that felt right for this project, and when I sent them to him he agreed. He was incredibly generous and insistent from the very beginning that he wanted this film to fit around me, not the other way around. So, the choice to use my music was an organic extension of his trust in my work. The songs in the film are "Daffodils Lie in Wait Beneath the Frozen Ground" from Wine and Poetry and "Hymn For Her" from Come Hither.

I’m proud of this piece of work and hope you enjoy the journey.   - Anne

“Music, uniquely among the arts, is both completely abstract and profoundly emotional… Music can pierce the heart directly and needs no mediation.”
- Oliver Sacks

The Musician : A 'Once Upon a Time' production.

Filmed entirely on location in Chicago at the Clark Street Bridge, Ward Park and The Athenaeum Theater.
Special Thanks to SAG/AFTRA, The City of Chicago Film Office, The Athenaeum Theater and Keslow Camera.
For more information and backstory, please visit: themusicianmovie.com and markschimmel.com. 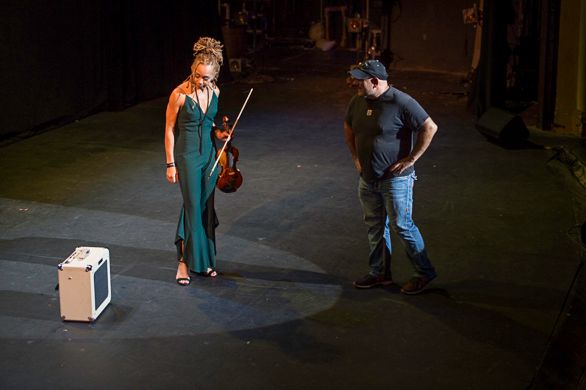 Hymn For Her music video from The Musician

SUPPORT "THE MUSICIAN"
If you wish to support "The Musician" movie with a donation, please do so here paypal.me/TheMusicianMovie